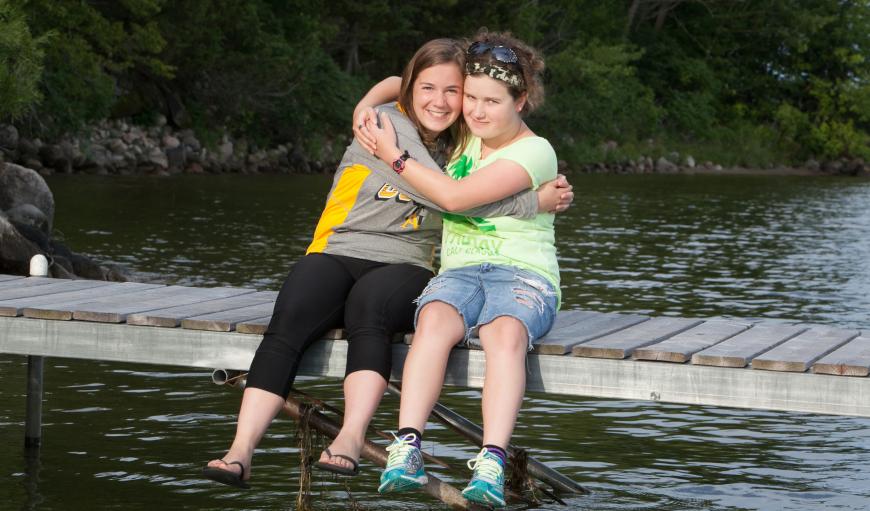 “Kendall has always been a strong personality,” shared her proud father, Dana Theide, who easily recalls vivid memories of his exceptionally active and vocal child. “She was talking and telling stories as early as two-years-old,” he said.

Then, Dana and his wife, Karen, began to see a change. Their social, playful daughter was suddenly keeping to herself and having difficulties relating to and interacting with others. A variety of tests revealed Kendall had Pervasive Developmental Disorder (PDD), closely mirroring Asperger’s Syndrome.

As Kendall grew older, community support played an integral part in her development and in keeping her family connected to helpful resources.

“We’ve learned that building strong support networks is key to finding what works for children who experience their world differently,” explained Dana.

Kendall found her biggest source of support eight summers ago, the first time she attended Lutheran Social Service of Minnesota’s Camp Knutson. Since 1953, Camp Knutson has been providing a nurturing place for children with disabilities and health conditions to find acceptance, support, and love.

“In many areas of their lives, kids who face challenges or adversity don’t fully participate,” said one Camp Knutson volunteer. “At Camp Knutson, they are in the circle instead of on the fringes.”

At Camp Knutson, children like Kendall are transformed by confidence they gain through new experiences.

“Kendall has always been an outgoing kid, but Camp Knutson has helped her find great belief in herself,” Dana said.

At Camp Knutson, he adds, every kid is celebrated. “The focus is on each camper’s abilities and interests, not their challenges,” he said.

Her family says Kendall is a very bright, cheerful 16-year-old. “She has a very open personality, helping her make countless friends at Camp Knutson,” Dana said.

Back at home and in school, Kendall says, building friendships is much more difficult.

“I don’t feel like kids understand me,” she said. “At camp, it helps to be around people who like me for who I am.”

Unlike traditional summer camps, Camp Knutson, in partnership with the Autism Society of Minnesota, offers a unique one to one experience so campers can focus on what excites them the most.

Kendall’s greatest memories are on the water front, laughing with friends. “I love being in the speed boat and tubing on the water,” she said.  “I have the best time of my life. I never want to leave.”

For Kendall, Camp Knutson is in session year-round. She’s not even unpacked before she starts writing stories about places and people she meets.

“Kendall has always been a creative storyteller, and Camp Knutson has been one of her greatest inspirations,” Dana explains. “She tells fictional stories of girls like her - the challenges they face, and how Camp helps them through those times.”

Camp Knutson has even helped Kendall strengthen an already close bond with her older sister, Delaney, who is a first-time counselor for Camp Knutson this year.

“Delaney is learning more about the world around her,” Dana said. “She’s growing her understanding and compassion for the experiences of other people.”

For Kendal, experiences at Camp Knutson have helped to ease the challenges she may face from Autism.