Confidence and Trust at Camp Knutson 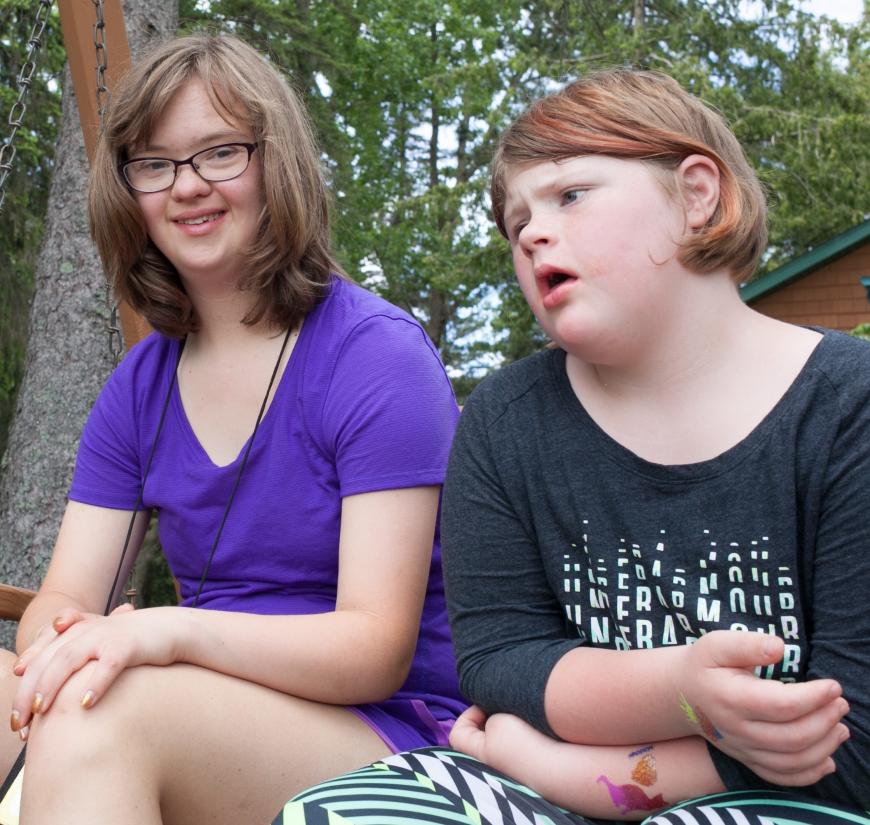 When Mona and Kurt Hjerpe brought their daughter, Meghan, to Lutheran Social Service of Minnesota’s Camp Knutson for the first time, they were a bit nervous. They hoped she would make friends, be alright without them and learn skills to enhance her independence.

But what was different for the Hjerpes from many parents, is that Meghan has Down syndrome. That meant that though they talked about camp, and Meghan was excited to go, they weren’t sure exactly how much she understood about being away from them for a week. As a teenager with a disability, Meghan had not experienced being on her own without her close-knit family nearby.

Camp Knutson partners with the Down Syndrome Foundation to provide summer camping experiences for young people with Down syndrome. Last year, Camp Knutson served over 1,000 campers with medical or developmental needs.

When the Hjerpes sent Meghan to camp that first year, they had several hopes. Mona shared, “We wanted Meghan to make new friends. We hoped she would learn that it was alright to trust people other than Mom and Dad. And we wanted her to experience some independence.”

Now, several summers later, Meghan is clearly at home at Camp Knutson. On a warm summer day, she strode confidently to the porch that served as a stage, encouraging friends to join her in karaoke. As she took the mic, a brilliant smile lit up her face. A natural leader, she seamlessly included kids who appeared shy, who wanted to sing but were hesitant. Meghan made sure they had their karaoke moment, knowing that together they were stronger and bolder. She offered them a safety zone to step out a little bit more by inviting them to sing with her.

This is a different Meghan than the one who first came to Camp Knutson. “Very nervous, very shy,” is how Angie Kniss, president of the Down Syndrome Foundation, describes young Meghan when she first came to camp. Now, Angie said, “Meghan is totally independent in everything she does, very confident, super outgoing.”

It’s pretty amazing that in just one week each summer, campers come to know themselves differently – as stronger, more capable, as leaders and friends. That is the goal of Camp Knutson – to create a summer camp where children and youth with medical or developmental needs can learn to embrace the whole of who they are and can step forward with confidence. At Camp K, campers learn that their disability or medical condition does not define them.

Mona describes the changes she had seen in her daughter, “Meghan has stronger social skills and has learned how to better discern the emotions and intentions of people around her. She has also learned that she can function on her own without Mom and Dad, and that is so important for her to know. She is much more independent.”

In a world that often does not support or encourage people with differences, Camp Knutson is a safe haven for young people to connect with one another and have a place to fully belong.