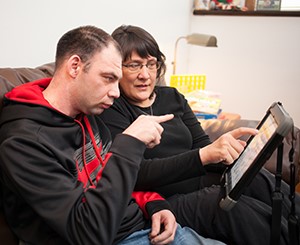 In two years, Seth’s life has transformed into what his family knew was possible.

“Seth’s journey illustrates what our services for people with disabilities stand for,” said Amber Iwanski, Designated Coordinator for Lutheran Social Service of Minnesota (LSS). “He went from spending countless hours watching television in his bedroom to participating in life.”

Before Seth could explore new places outside his home supported by LSS, he pulled up a chair in Iwanski’s office and together they created Seth’s first-ever Bucket List.

Included on the list was attending a live NASCAR race to catch a glimpse of Dale Earnhardt, Jr.

“That’s the moment I wished I could spend my days making everyone’s dreams come true,” Iwanski shared of watching Seth enthusiastically retell the experience of receiving lug nuts from his favorite racer champion’s pit crew. “I couldn’t wipe the smile off Seth’s face if I tried,” Iwanski said with a chuckle.

Not funny, though, were frustrations Seth felt from struggling to clearly communicate about his passions like NASCAR with friends and family.

“He’s learned to be adaptable,” Iwanski says, explaining that Seth’s developmental disability means communicating clearly can be challenging. “He will repeat himself over and over, but it can be exhausting for him.”

Until generous donations from members of LSS' executive operations team provided him a brand new iPad and a renewed sense of his world. Together with his staff, and support from Iwanski’s 15-year-old tech-savvy son, Seth created personalized pages on the iPad with words, pictures and videos that he uses in conversations with loved ones.

Eventually, the iPad will support Seth’s interactions with his job coach, making his job at a supportive vocational center for adults with disabilities more enjoyable. “I have a lot of fun completing my work,” he said.

The goal of Seth’s iPad isn’t to replace his verbal language, Iwanski explained, rather to clarify his words. “Technology will help Seth express his needs and develop closer relationships,” she said.

Supporting Seth in feeling comfortable with the iPad is integral to his success. Each day he is encouraged to practice pressing pictures and buttons to develop his language skills. “Soon the iPad will become habit so he can easily check in with people who mean the most,” Iwanski added.

Using the iPad has helped Seth stay connected to his far-away family.

“He is amazed he can video chat with them any time,” Iwanski said of Seth’s desire to see his grandparents in Florida more than once a year. “It was high on his Bucket List,” she said.