How Do I Teach My Teen To Be Responsible With Money? 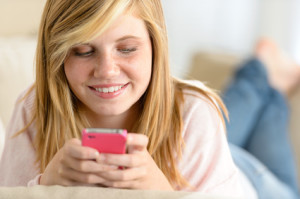 When my daughter was 15 I started thinking about how to teach her about managing money with real-life tools. I was tired of her always asking me for money to go to the movies or to buy this or that and me usually responding with “no.” It caused stress for me and disappointment for her. So I thought if I gave her an allowance that would cover most of her “extra” expenses in a month (entertainment, clothing, snacks, etc…), that she could learn how to manage it in a safe way, and it would take some stress off of me. I hoped it might even help prepare her for when she found her first part-time job – then she would have at least some skills and planning her spending and maybe even saving.

The first step was to open up a dual checking account. This would allow me to deposit her allowance so she could learn to track her spending and manage a checking account. We went to our credit union (where she already had a savings account) to open her first checking account. They happened to have a promotion for new accounts: she could get $75.00 free for opening an account, but she had to use her debit card at least 5 times in a month. It seemed like a good deal – and she has never been one to turn down free money. So we signed her up.

I decided I would give her $100 a month to start. How much more could a 15-year-old need? I made sure to opt-out of “courtesy pay” so that she couldn’t overdraw her account (or get charged Insufficient Funds Fees) and we didn’t order any checks.

The first month went pretty well…she opened her account with $175 and at the end of the month, her balance was $1.12. No savings, but at least she had something left!

The second month was a bit more difficult. She pulled most of her money out in the first week because there was a dance at school. Then, she went out to the movies with a bunch of friends. By the second week she was asking me for money again. And I gave in! After another month of this happening I held my ground and didn’t give her extra money, but her friends fronted her until the next month at which time she would have to repay them…she was actually going into debt!

We continued the experiment for another 2 months, at the end of which we both decided to close down the checking account. I was frustrated thinking “she’s just an uncontrollable spender” and started worrying about her future and how much debt she might go into. She was sick of me “encouraging” her (or her words, “nagging” her) to save money and hated being in debt to her friends. I also noticed it didn’t work as far as limiting how much I was spending on her “extras.”

In fact, I had spent more! Undeterred, I started looking for answers to the age-old question:

“How do I teach my teen responsibility with money and have her stop asking me for money all the time?”

I did a lot of research…and this is what I learned.

Look at Your Own Relationship with Money

This is something that few people are comfortable doing; it can bring on feelings of shame and embarrassment, or even anxiety attacks – even if you are doing a great job with your money. Believe it or not you are shaping your child’s relationship with money based on how you handle it.

Our children observe us with keen eyes: they know when we are stressed, and they see the effect money has on us, our relationships, and the family as a whole. Getting your money house in order will give you the confidence to instill good money habits with them. I had to take a long, hard look at what my attitude toward money was and what messages I was sending to her. I realized it mostly from a state of deprivation: “We can’t afford it” was my main message. I also realized my savings was a bit too low and I had a habit of going over my own spending limits. I am sure she heard me complaining of always being broke as well. Not very positive money messages there.

Learn to Say No

From birth our children know how to get what they need from us. As they grow, they learn to also get what they want from us and they have a hard time understanding the difference…or at the very least hearing the word “no.” Whether it’s in the check-out line at your favorite superstore or during a commercial break in your own living room, most parents have been assaulted with “I want it NOW!” from their children.

Some parents can say no and that’s the end of it. Maybe there is a small whimper, or a pouty-face, but the child knows that no means no. If your child is anything like mine, though, no is just permission to ask again. And again. And again. Throughout her younger years I made the mistake of sometimes caving-in to my daughter’s demands and sometimes holding my ground. It was confusing for her. It wasn’t until I consistently set a limit and stuck to it – no matter what “emotional blackmail” she threw at me – that the asking slowly decreased. It has not completely gone away yet, but I like to focus on progress not perfection.

Include Your Kids in Financial Discussions 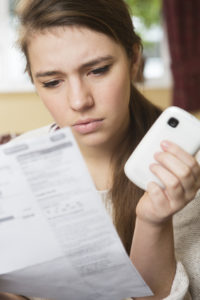 This may sound risky, or uncomfortable to say the least, but it could help your child learn life-long money management skills – especially in tough times. I’m not saying let them decide what car to buy or how much to spend on groceries, but you could sit down as a family and let them know how much you make and then make a list of your expenses so that they can see that there isn’t always “extra” money to order pizza, go to the movies, or buy a smart phone.

But if your family needs to cut back on some expenses to reach a goal (like saving for vacation) or to make up for lost income due to a job loss, illness, or injury it can be a great time to include older children in the discussion of where to cut back. Do you keep the ultra-primo cable subscription or stream movies through the internet so you can save $150 a month? Or do they want the smart phone enough to give up cable/internet? Can they trade in name-brand cereals for generic? Include them in these discussions and you may be really surprised by the creative solutions they come up with.

I did this with my daughter and it blew her away. She was really surprised to see how much it cost just to cover the basics each month. This was when we adopted our new catch-phrase: instead of saying “we can’t afford it” we started saying “it’s not in the budget.” She actually started asking me to see if we could put something in the budget and bargaining for what she would give up. And I started feeling more in control because “not in the budget” implied I had made a choice.

Teach Them “Wants vs. Needs”

A need is defined as that which allows you to live with safety and dignity. It’s pretty clear that needs include housing, food, electricity, basic phone service, transportation, and health care. But is a cell phone a need? Maybe in your family it is, but it isn’t for everyone. Is a car a need? It depends on where you live. Is cable and internet a need? Well you have to decide that one (and if you want some tips, read How to Survive Without Cable). When your kids tell you what they think are wants and needs, ask them how they came to their decisions. Help them understand how their peers, advertising, the entertainment industry, and societal norms can make them feel like their wants are needs. The more they are aware, the more they can think for themselves and make informed decisions when spending their money.

Set Limits and Stick to Them

It can be really hard to set limits with our kids, but if we don’t we are really not doing them any favors and may be dooming them to a life-long battle with living paycheck-to-paycheck and/or struggling with debt. It’s an important money lesson to learn that sometimes things worth having are worth working for and that we can’t always have what we want when we want it. Family resources are finite. Does this mean that you and your child have to feel deprived? Not necessarily. Remind them of the list of expenses you already went over with them so that they understand that other things, like groceries, have to come before a smart phone or even the movies with their friends. Then start brainstorming solutions with them. If they really want something, they will figure out how to get it.

The toughest limit I ever set with my daughter was over getting her driver’s license and driving. When she turned 15 and she started getting excited about learning to drive, we talked about the responsibility and expenses of driving a car. My partner and I firmly believe that driving a car is a privilege, not a right, so it was expected that she would pay for half of her driver’s education course and once she got her license she would have to have enough saved to cover a $500 deductible for insurance in case she crashed the car, and she would be responsible for her portion of insurance and gas. I was hoping this would motivate her to get a part-time job and save money, as well as teaching her about the costs of driving. Unfortunately, it didn’t. Well, at least not at first. We live in the city – it was easy enough for her to take the bus to get where she needed and wanted to go; plus she got bus passes for free through her school. She took the easy way out, but that was her choice.

My daughter is 19 now and she still doesn’t have a driver’s license. She could easily go get her license now without even taking driver’s education, but she decided on her own that she doesn’t want to spend that kind of money on driving. Besides, according to her, there are “too many bad drivers out there” and she doesn’t want to contribute to more traffic and “greenhouse gases”. My partner and I bought her a bike for graduation and she tells everyone that we got her a “new set of wheels”. Bike riding is free, doesn’t require insurance, or gas, and it’s great for her health.

So be honest with your teens and include them in decision making processes (when realistic). Teaching them about finances now will help them better manage money as adults.

Do you have a teenager who is driving you to the poor house? What has worked for you? Leave a comment with your tips.

If you need help putting together your own spending plan or paying down debts our financial counselors are here to help you figure it out. Give us a call at 888.577.2227 to schedule a free, confidential appointment. LSS is here to help you reach your financial goals and conquer your debt. So don’t wait, take action today!