Our Story. Our Impact.

"So often, following a disaster or traumatic event, a young child may think that his or her thoughts or behaviors caused the terrible event to happen. What’s worse is that they carry this fear secretly inside.”

How It All Began: Community Need and a Powerful Response 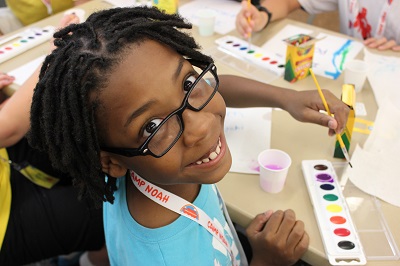 Because a child’s brain develops at such a rapid rate, it is uniquely sensitive to the disruptive forces of stress and trauma. The very first Camp Noah was held in response to the extreme Red River flooding in 1997. The disaster affected communities from Fargo to Winnipeg.

Each day at camp, the children would gather with caring adults who reminded them that they were safe before asking if anyone wanted to share their feelings or ask questions about the record-setting flood.

Noah Smith attended the very first Camp Noah and carried its impact with him long after the event ended. In fact, that childhood experience would eventually come full circle. Nearly 10 years later he supported a local Camp Noah to bring healing and hope to kids affected by another flood. “Seeing the impact Camp Noah has on kids, this time as an older guy, was cool,” says the comedian who now lives in Chicago. “I hope that it helps them all the way through their lives, like it did for me.”

For more than two decades, Camp Noah has responded to a wide range of natural and human-caused disasters. It is the only national program providing child-specific resiliency-building curriculum during a community’s long-term recovery. Since it began, thousands of committed volunteers, donors, and community partners have helped support more than 14,000 children in 29 states and in Puerto Rico.

Each camp takes place over five days, but its impact lasts a lifetime. In a safe space, campers learn that they are not alone – that other children have the same fears and worries. They develop critical skills that help them emotionally recover not only after disaster, but also from challenges throughout their adolescence and into adulthood. Campers share their disaster stories, grieve their losses, plan for their future, play with purpose, and learn lifelong resiliency skills in a safe, structured setting. They also learn how to support others facing the unexpected – such as their friends and family members who are coping with their own challenges.

Camp sites are determined each year based on need. Camp Noah helps bring community partners together and empower children with the tools they need to move forward. Camps are carefully customized based on each community’s need and evolve to incorporate new research and best practices. When necessary, materials are translated into multiple languages and culturally appropriate activities are integrated into the curriculum.

The Next Chapter: Where We are Going

Right now Camp Noah staff are preparing to serve children across the country who have been impacted by recent hurricanes, wildfires, and other disasters. You can support Camp Noah in providing children with the skills and support they need to bounce back from disasters in two ways:

Camp Noah is provided free of charge to the children who attend, by generous support from partners and donor contributions. We invite you to change a child’s life by making a gift today. A $100 gift fully sponsors a day of Camp Noah for one child.

We rely on individuals, churches, students, and groups from across the U.S. to run Camp Noah and welcome volunteers from all backgrounds. You can join us in a variety of ways — by traveling to help put on a camp, fundraising, supporting administration, serving as an intern, and much more.