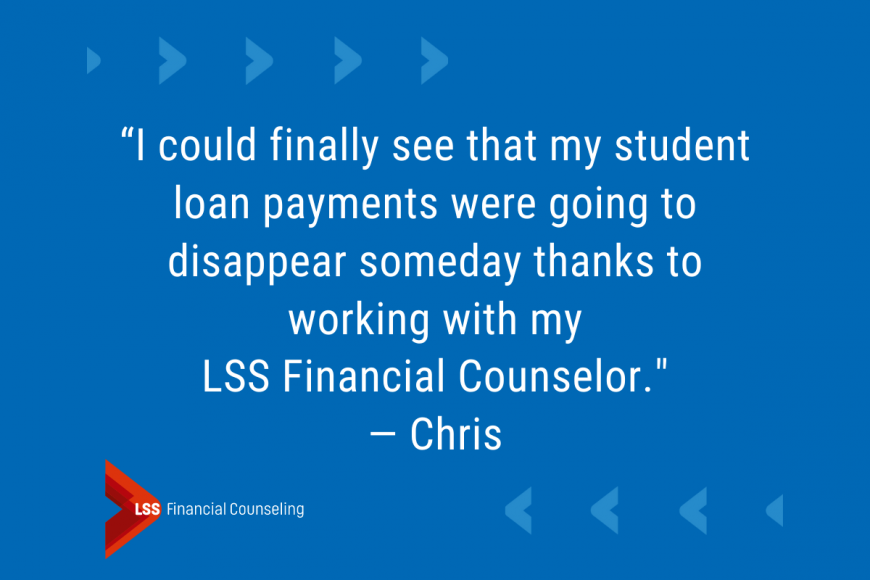 Getting Rid of the “Monkey on My Back”: Student Loan Debt

From securities trader to architect to a project manager of teams at the University of Minnesota conducting federally-funded research, Chris’ career has been satisfying and rewarding.  For several years after his college graduation, though, he was accompanied on his career path by what he called “the monkey on my back” – overwhelming student loan debt.

Chris relied heavily on student loans to complete his bachelor’s degrees in social science and finance and, several years later, his master’s degree in architecture. “My generation was the first that was unable to finance our education through work. I lived off loans during my undergrad and graduate years.” By the end of graduate school, he had accumulated more than $120,000 in student loan debt, even before interest began to accrue.

“No one told me that I wouldn’t be able to pay this off easily,” Chris said.  “The interest on the loans themselves was growing faster than I could pay it, so the balance was actually going up each month. I eventually realized that it could take the next 30 to 40 years – or longer – to erase the debt.”

The Debt Takes Its Toll

This became a source of great stress for Chris. His student loan payment was the second largest bill each month after his mortgage, but he was hardly making a dent in his overall balance. “In the back of my mind consistently was this mountain of debt. Seeing the bill each month was a regular reminder of that mountain,” he said.

“The debt also ate away at my self-esteem. I would hear about classmates who had erased their debt, and I felt embarrassed.  What did I do wrong? Why did l get into this predicament but others didn’t?“

To help make payments, he took second jobs: a guide for walking tours along the Mississippi River for four years, a kayak tour guide for two summers and a doorman at a condo building for three years. But this extra work took its toll. “Working every weekend meant missing out on events with friends and family, and I was always exhausted.”

Chris found out about LSS Financial Counseling through his employer as an employee benefit offered through LSS Financial Counseling’s Financial Choice service. “I heard they helped individuals get enrolled in student loan forgiveness programs, but the prospect of contacting someone for help and acknowledging my problem was scary, daunting and intimidating. I thought the process would be lengthy and complicated; I thought I’d be condemned and shamed, and I was scared about facing the reality of the financial shape that I was in at the time.”

A Path to a Future Free of Student Loan Debt

Chris eventually called LSS Financial Counseling’s office and connected with Financial Counselor Dan Park. “From my very first meeting and each one after that, Dan was very respectful. He didn’t come down from an ivory tower to tell me what to do and talk down to me. There was no shame or judgment. He was just another member of the community who had answers and tools. He was there to assist me, not fix me.”

Within an hour into that first conversation, Chris’ student loans were consolidated into a specific type of federal loan, which made Chris eligible for the federal Public Service Loan Forgiveness (PSLF) program. Dan was also able to move Chris to the least expensive repayment plan, which reduced the monthly payment from $500 to $350. The new amount was not only lower; it would remain the same even if Chris’ income went up, unlike his previous payment.

Working with Dan, Chris then created a realistic budget. He learned how to stay on target for saving money, paying off credit cards and reaching other financial goals. In just two weeks after meeting Dan, Chris was firmly on the road to a future free of student loan debt.

“Due to the restructured loans, the loan forgiveness and my stronger money management skills, I could finally see that these loans were going to disappear someday, and I was going to be in a much better financial situation,” said Chris. “My life became much more organized and much less stressful.  I gained confidence, and I quit my second job.”

During the COVID-19 pandemic, Chris and other student loan borrowers received additional benefits. His loan payments and the accrual of interest on his loans were put on hold because of federal legislation and the U.S. Department of Education (DOE) actions. In addition, each month that payments were paused was counted toward forgiveness of his loans.

In March of 2022, Chris heard about the DOE’s additional but temporary changes to PSLF that could help forgive his loans faster. He met with Dan to ensure any necessary paperwork was filled out correctly. They then called Chris’ student loan servicer. He knew what information he needed to get, “I didn’t know exactly what questions to ask and what language to use. Dan gave me tips on what to say so I could get the necessary information and make sure I was on the right track to full loan forgiveness.”

In May, 2022, Chris received a letter from the servicer that his entire remaining loan balance – $125,000 – was now zero. Before this, Chris had expected eight more years of loan payments before forgiveness happened.

“I felt like I won the lottery,” Chris said. “I felt an overwhelming sense of relief, and I stopped feeling the guilt and shame I’d felt over the years.”

He is also excited because of the greater flexibility he now has in his finances. “I have several hundred dollars freed up each month now, which before went to an effort that felt like spitting on a fire. I’ve been able to save more and am freer to travel and take vacations. I’m not doing anything that’s extravagant, but my financial life it definitely on an upward trajectory. I'm very proud of the way I'm able to live now compared to three years ago, when I first met with Dan.

“I wish I’d known Dan 10 years ago and reached out to him then,” Chris continued. “I’m telling everyone I know about LSS Financial Counseling’s services, especially the University of Minnesota students with whom I work.”

If you have questions about your student loans, want to learn more about repayment options or loan forgiveness options, LSS Financial Counseling is here to support you. Call 888.577.2277 to set up your free appointment with one of our certified, experienced student loan debt counselors.

This blog was written about Chris, an individual who benefited from LSS Financial Counseling’s Student Loan Debt Counseling services.